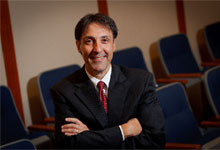 Ed Brodsky is the oldest of four children. He was born in Toledo Ohio in 1965. His father and mother instilled in him the values of honesty, hard work and compassion while maintaining the dedication to his profession. Ed is married to his wife of 18 years, and together they are raising their children in Manatee County, where both children attend local public schools.

In his youth, Ed wanted to be a police officer because of his admiration and respect for the law. To this end, he graduated from the police academy and served as a reserve police officer and with the Florida Army National Guard Military Police.

While earning his degree in Criminology at the University of South Florida, Ed decided to work toward becoming a prosecutor to further serve law enforcement and pursue justice. During his studies at the University of South Florida, Ed worked at the Public Defender’s Office to better his understanding of the justice system. But keeping true to his commitment to prosecution, Ed enrolled in the Nova University Law School of Ft. Lauderdale Florida where he earned his law degree. Upon Graduation from law school, Ed worked a short time in the 17th Circuit in Broward County before finding his home in Manatee County with Earl Moreland over 22 years ago.

Ed began his career in misdemeanors prosecuting domestic batteries, DUIs and countless other charges before being promoted to the felony division. In felonies, Ed served with distinction bringing justice to the victims of Murderers, Rapists, and Child Predators.

As the Chief Assistant State Attorney for the 12th Judicial Circuit, Ed was responsible for overseeing all attorneys and staff in all four offices across Sarasota, Manatee, and Desoto Counties. In addition, Ed served on the Public Safety Coordination Council, and on the Criminal Justice Commission in Sarasota.

Your State Attorney is Board Certified by the Florida Bar in Criminal Trial Law, is fluent in both English and Spanish, and is committed to serving his community with passion and integrity while upholding the highest ethical standards. Ed became a prosecutor to protect the public and ensure the administration of justice. Because of this, he believes he is responsive to the needs of the community and law enforcement.

Ed Brodsky was sworn in as State Attorney for the 12th Judicial Circuit of Manatee, Sarasota, and Desoto counties on Jan. 8, 2013.